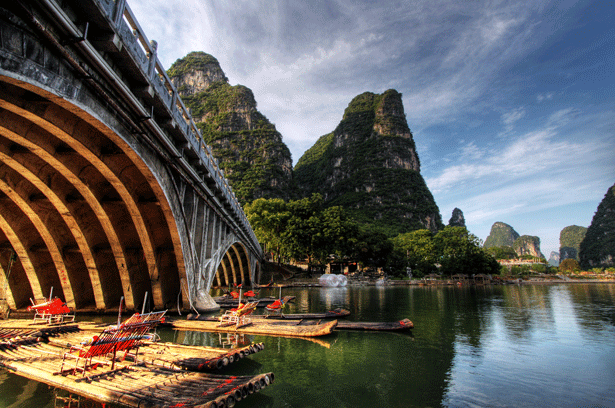 Yangshuo is a town located within the county of the same name in Guangxi Province. Yangshuo is usually accessed from the city of Guilin and this town, which is bordered by the Li River, is renowned for its many stunning karst formations and scenic spots.

For years, the town has been a mecca for backpackers and rock climbers and in fact many foreign visitors over the years have laid down roots in Yangshuo. These former visitors now run stores, restaurant, hotels, and rock climbing outfits in the main town of Yangshou.

The beauty of Yangshuo is legendary and it attracts visitors from all over the globe.

Yangshuo is described as an all-weather destination for it is bestowed with a year round temperate climate. The average annual temperature in Yangshuo is approximately 19°C (66°F), all throughout the year, though winter temperatures in this scenic city often dip to around 10°C (52°F) during the winter months. Keeping in mind this weather pattern, it is best to visit Yangshuo during the seasons of spring (April to May) or autumn (October to November), when temperatures hover here between 15°C (59°F) and 22°C (71°F).

Citizens of most nations require a visa to visit destinations in China. Currently only citizens of Japan, Singapore and Brunei can enter China without a visa for a period 15 days for tourism, a family visit or business.

Getting to and around Yangshuo

Yangshuo is usually accessed via the Guilin Liangjiang International Airport which receives a wide array of domestic and international carriers. The Guilin Liangjiang International airport can be accessed via an hour and a half drive from Yangshuo. Yangshuo can also be reached by bus/coach from the Guangxi and Guangdong provinces and the city is equipped with its own bus station that is located next to West Street. Transportation within the town of Yangshuo and the rest of the county, is provided by minibus, tricycle taxis and bicycles. Bicycles provide an inexpensive mode of transport in Yangshuo and are very popular as a means of transport, with tourists and locals alike. Yangshuo is known to be a backpacker’s haven, though the city now gets all types of tourists who come here to discover its many scenic delights. As a result, Yangshuo is equipped with several small hotels and guesthouses, which cater to the various accommodation needs of visitors.

The River View Hotel, which overlooks the Li River and is situated close to West Street, offers 39 air-conditioned guestrooms. Most of the rooms are equipped with balconies and are outfitted with modern conveniences, like flat screen TVs with cable channels. The hotel is equipped with a tour desk that can help to organize excursions to the county’s scenic areas and also offers bicycle rentals onsite.

The Camellia Resort hotel is located close to Moon Hill and the Yulong River. The hotel offers well-appointed, spacious guest rooms which are equipped with free Wi-Fi and feature oriental décor. Most rooms overlook the hotel’s beautiful Chinese garden that features sparkling waterfalls and rock formations. The hotel is equipped with a restaurant that offers both western and Chinese fare. Other facilities at the hotel include onsite bicycle rentals and a tour desk that can help arrange excursions.

The Dragon River Retreat Hotel is located on the banks of the Yulong River, close to attractions like Big Banyan Tree, Moon Hill and Butterfly Spring Park. This boutique hotel offers spacious guest rooms that afford mountain views and are equipped with free Wi-Fi. The hotel is equipped with a restaurant that serves Chinese and Western fare. Other facilities at the hotel include a free frequent shuttle service to and from Yangshuo, a library, facilities for sports like badminton and pool, onsite bicycle rental and a tour desk which can help organize excursions.

The Xingping scenic area is located at a distance of 25km north east of Yangshuo and can be accessed via minibus service. The Xingping ancient town dates back to 590, the period of the Sui Dynasty. This ancient town and its surrounding area, offer many scenic spots, which are situated along the Li River like the Nine Horses Fresco Hill, the Lotus Cave (a spectacular karst land formation) and Snail Hill. The ancient town itself is well-preserved and offers various sites like a ferry pavilion, a temple and an ancient bridge. Such is the historical significance of the Xingping ancient town that it is featured on the back of a 20 Yuan note. 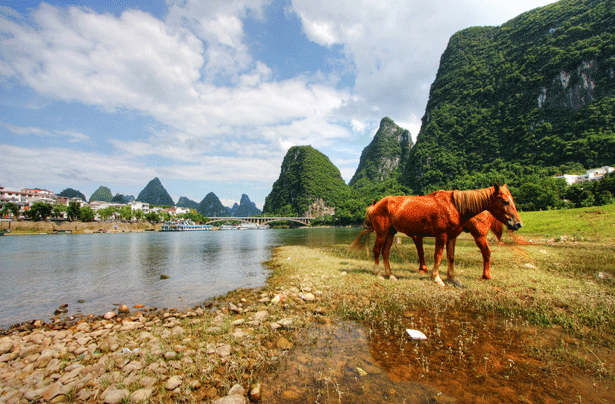 The attraction of Moon Hill is located at a distance of 7km from Yangshuo.  Moon Hill rises to a height of 380 meters (1246 feet) above sea level and features a limestone peak which sports a moon-shaped hole. The hill also hosts a cave which is shaped like an archway and is 50 meters (164 feet) in height. This cave can be accessed by climbing 800 steps which were completed in 1981. Moon hill is one of the most visited spots in Yangshuo and depending on where you view the hill from, the moon shaped hole appears to have different shapes sometimes appearing like the full moon, other times a half-moon and sometimes even as a crescent.

The Big Banyan tree is located on the banks of the Jinbao River approximately 7.5kms from Yangshuo.  This tree which was planted during the Sui dynasty (581-618) has survived the ravages of time and elements, so that it stands tall until today. This gargantuan tree rises to a height of 17 meters (55 feet) and has a trunk that measures 7 meters (22 feet) in diameter. The tree has twisted roots and gnarled branches but continues to provide much shade so that those who bask in its shadow are completely shielded from the warmth of the sun. The Big Banyan extends over more than 100 square meters and has the appearance of a lush green canopy.

The Silver Cave Scenic Area is situated in Lipu County, which is located at distance of 25kms from Yangshuo. The Silver Cave scenic area can be accessed by mini-bus or by private car. The Karst formation of the Silver Cave extends over 12 peaks and features numerous sparkling white stalactites and stalagmites. The cave extends over 10km and also features a subterranean river. The cave and its various rock formations can be accessed via prepared paths. The entire Silver cave scenic area is a well-developed tourist attraction that offers various activities like rock climbing, boating, and other active pursuits. 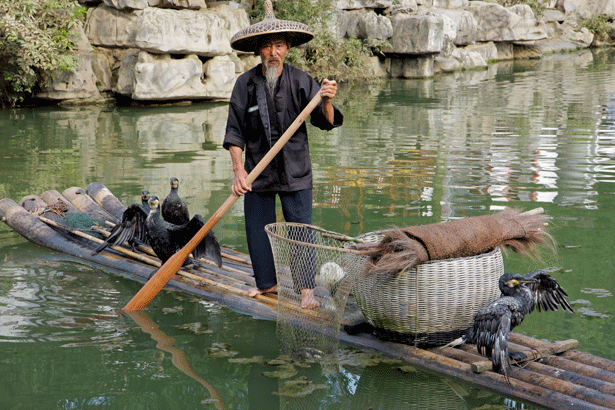 A Yangshuo holiday typically features much physical activity, as the area’s many picturesque spots are best explored atop a bicycle or on foot. Aside from these active pursuits, this beautiful county also offers various other attractions that feature much entertainment for the whole family.

Take in a performance of Impression Sanjie Liu

This sensational outdoor night show has been directed by the celebrated, Yimou Zhuang who was also responsible for the Opening Ceremony of the 2008 Summer Olympic Games. This spectacular production is hosted at the Li River Mountain Theater and it showcases the harmonious relationship of mankind and nature. The production which took five years to develop features 600 artists and lasts approximately 70 minutes.

Cruise on the Li River

Many local tour operators offer cruises along the meandering Li River. These cruises are conducted aboard bamboo rafts and last two to three hours with stops for photo-taking. Other operators also offer kayaking expeditions on the Li River. All of these activities give visitors a chance to soak in the stunning scenery that surrounds the Li River. 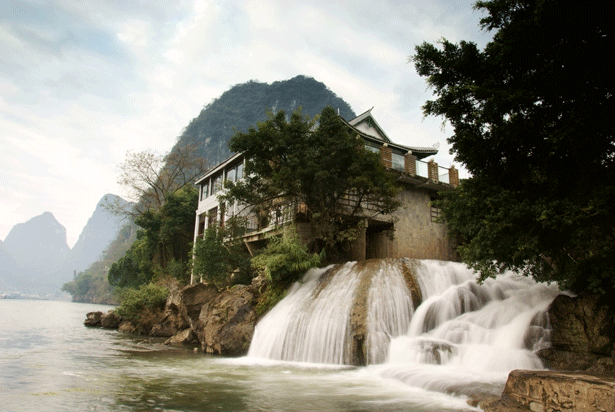 The Buddha Water Cave is a fascinating karst landform, located near Yangshuo. This subterranean cave complex is made up of three principal areas; the paradise scenic area, the mud bath and the underground hot spring. The cave is covered in typical limestone formations, millions of stalactites and stalagmites some of which are said to resemble Buddha, hence the name of the cave. The mud bath area is an area of the cave that draws the most visitors, for it offers them a chance to immerse themselves in a mud-filled pool that is supposed to have healing properties. After frolicking in the mud bath, visitors usually wash off the mud by standing under the 15 meter-high waterfall at the entrance of the cave.

West Street is Yangshuo’s main drag. This main street dates back to 590 AD (the reign of the Sui dynasty) and is the oldest street in the town. West Street, which is paved with flagstones, is a pedestrianized enclave that is lined with old traditional Chinese row houses and stores. Most of the store-keepers speak English. In fact some of the shop-keepers on West Street are foreigners who have settled down in this beautiful town. Many restaurants located here also serve popular western foods, which is especially popular with homesick tourists. Most stores on West Street stay open from 9am to 10pm.

Useful contact numbers to have on hand while visiting Yangshuo